IFFO has calculated that currently around 31% of the world’s marine ingredients production comes from by-product. 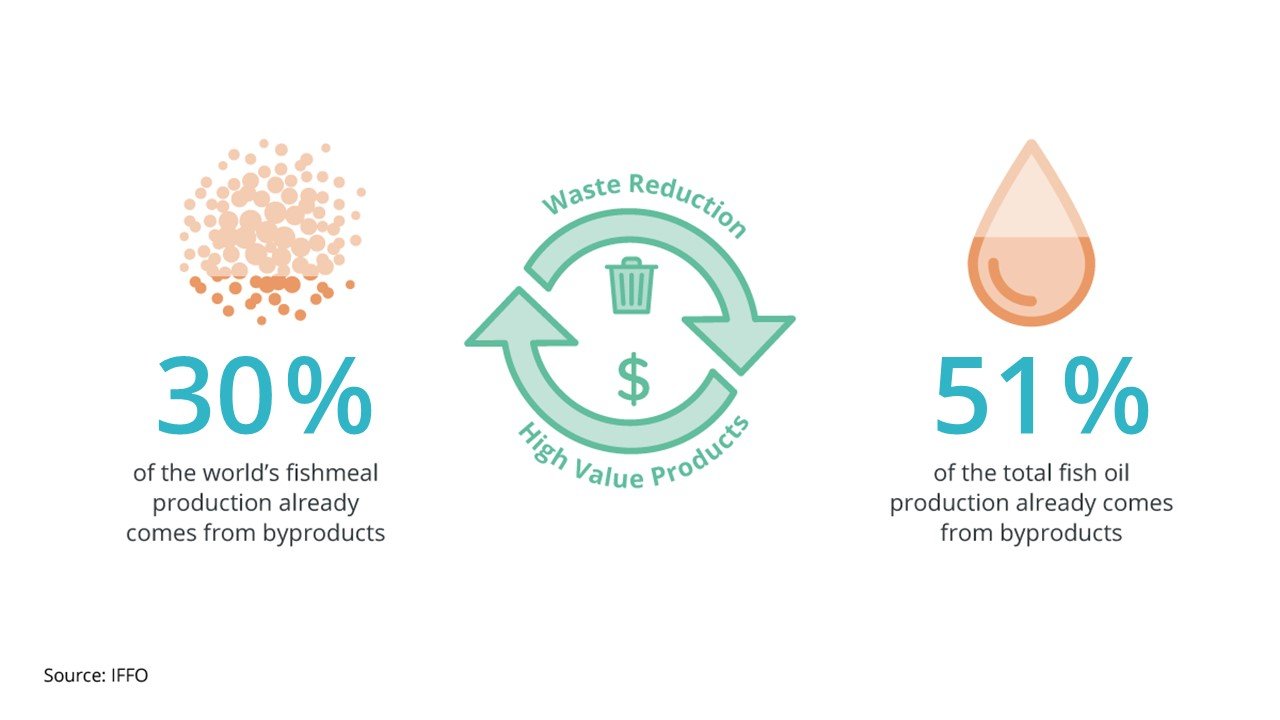 Fish destined to direct human consumption is often processed in a way to make the eating experience easier and quicker for consumers. Such processing gives rise to by-products in the form of heads, viscera, frames, skins and others such as tails, fins, scales, mince, blood, etc.

All this raw material can represent between 30 and 70% of the wet weight of the fish - depending on the species and is considered valuable raw material from which fishmeal and fish oil may be produced.

By-products can come from wild caught fish or aquaculture processing. Most of the raw material comes from finfish such as white fish trimmings (pollock, cod, hake, haddock and others), pelagic such as herring and mackerel, as well as other species such as salmon (wild and from aquaculture), tuna, pangasius and tilapia.[1]

As for the reduction of such by-products into valuable marine ingredients, some fishing vessels are equipped so to preserve or process by-products on board into fishmeal and oil or, alternatively, onshore facilities have developed rapid collection methods to ensure that processors have a reliable outlet for their by-products. More and more large aquaculture operators nowadays tend also to have access to advanced facilities that preserve and process by-product raw material into fishmeal and oil. This is particularly the case for farmed Atlantic salmon, pangasius and tilapia.

The very fact that the fish processing by-product is increasingly used as raw material to produce feed marine ingredients is great news. Indeed, the utilisation of by-products helps reduce waste, and at the same time contributes to the production of high value products that promote health of humans and animals.

When we look separately at fishmeal and fish oil, we find that the global production of fishmeal from by-products accounts for 29.8% (Figure 1), while fish oil output from by-products represents 51% of the total fish oil production (Figure 2). The higher value compared to fishmeal is due mainly to the high oil yields of salmon and pangasius trimmings. [2] 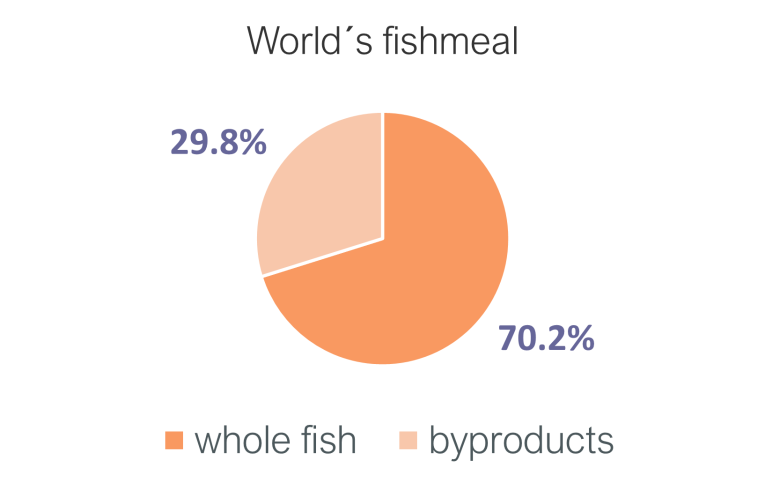 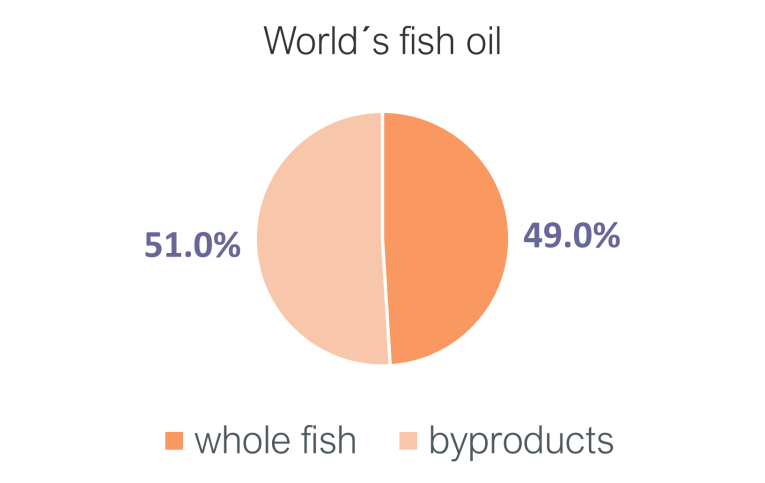 To better understand the origin of the fish by-product, IFFO has carried an analysis of the contribution provided by the different species used for direct human consumption in 2021.

As shown in Figure 3, by-products coming from the filleting processing of pelagic species such as mackerel and herrings and from demersal fish such as hake and pollock provide more than 13% of the global raw material used for reduction to meal. Another 5.7% comes from tuna trimmings and offal, followed by 2.3% of salmon by-products, while 3.3% of pangasius off-cuts and a further 2.3% from tilapia by-products. 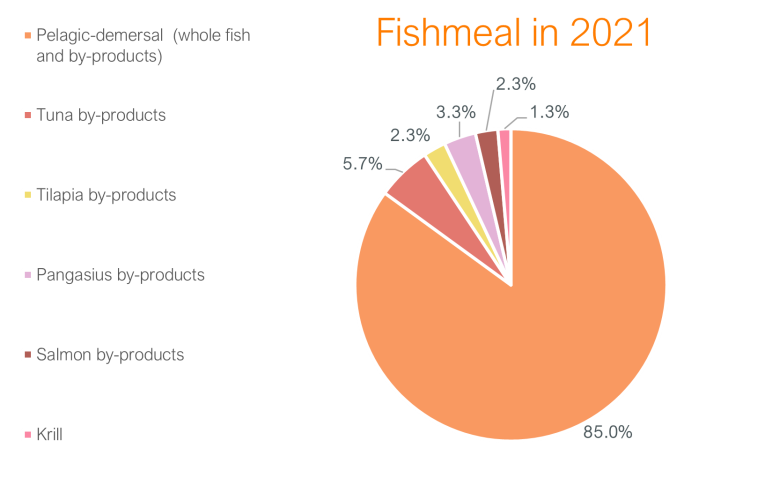 When it comes to the raw material used for fish oil (Figure 4), salmon by-products provide 14.3% and pangasius by-products provide 15.3%, meaning that the combined contribution of these 2 species accounts for more than a quarter of the world´s total. The main reason is the high oil yields they produce. Another 2.2% of the global supply of fish oil is provided by tuna by-products, and finally 1% comes from tilapia off-cuts. 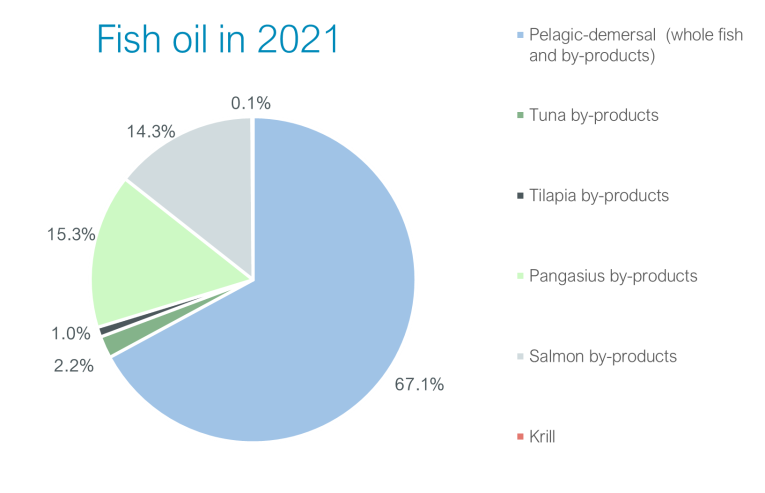 In Figure 5 we finally summarise the current regional breakdown of marine ingredients produced from by-products. Asia is by far the region where the recycling of precious fish raw material occurs more, and from where around 35% of marine ingredients based on by-products is coming nowadays. Europe and Latin America follow suit, although all regions appear committed to reduce waste to some extent. 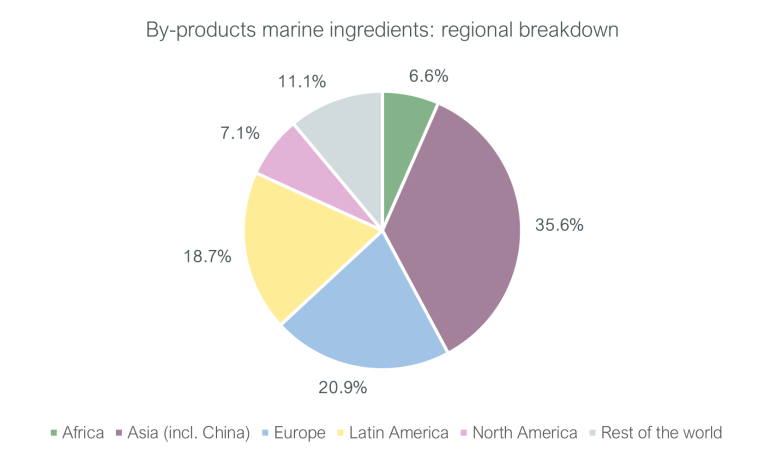 Although these numbers tell us a promising story, as previously highlighted by Jackson and Newton (2016)[3] there is still a large proportion of the by-product of fish for human consumption that is wasted instead of being turned into high value products that contribute to the supply of nutrient rich food.

Jackson and Newton have estimated that globally there is already a potential of almost 12 million tonnes of by-product produced in processing plants that are not collected for the production of marine ingredients. Asia is by far the area with the largest potential for the utilisation of by-products, although other regions such as Europe and Latin America are also believed to have a great unutilised tonnage of offcuts.

[1] Other raw material sources include cephalopods such as squid, and crustaceans such as shrimp (both wild and farmed).

[3] A. Jackson, R.W. Newton, Project to Model the use of Fisheries by-Products in the Production of Marine Ingredients with Special Reference to Omega-3 Fatty Acids EPA and DHA, 2016