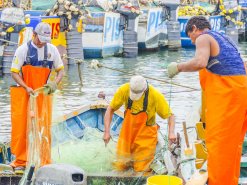 IFFO is an international trade organisation that represents the marine ingredients industry, such as fishmeal, fish oil and other related industries. Marine ingredients are nutritious products used mainly for aquafeed, land animal feed as well as for human consumption and are derived from marine organisms such as fish, krill, shellfish and algae. IFFO’s members reside in more than 50 countries, account for over 55% of world production and 75% of the fishmeal and fish oil traded worldwide. IFFO is an accredited Observer to the UN Food and Agriculture Organisation (FAO). 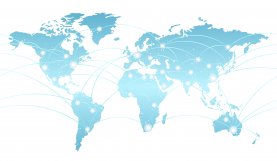 What do we do?

What do we do?

Acting on behalf of the fishmeal and fish oil producers and their trade associates, IFFO works to strengthen the global standing of the industry, while supporting responsible supply worldwide. Our mission is to be the global trade organisation supporting marine ingredients businesses, that:

For an overview of our work, please see our Annual Report. 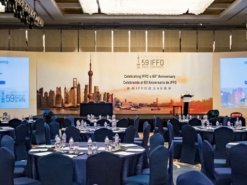 With a collective history of 60 years, IFFO has thrived with the continued support of its members, 40% of which have been members for over 10 years. IFFO’s members stretch across the marine ingredients industry, from key players to local traders, and our network is unravelled in the industry. Our work representing members and providing them with support covers a broad range of services, including advice and reports on marine ingredient markets, technical developments, regulations (including in China), and vital networking opportunities. To find out more and how to join, click here. 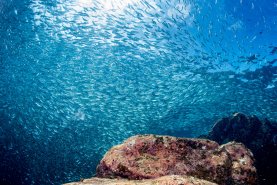 What are marine ingredients?

What are marine ingredients?

Marine ingredients are nutritious products used mainly for human consumption or animal feed and are derived from marine organisms such as fish, krill, shellfish and algae. They can be used across a broad range of applications from their traditional use as feed ingredients to applications in health food supplements, pharmaceuticals and cosmetics. 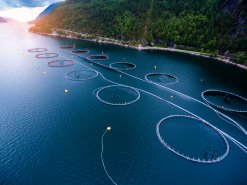 What are marine ingredients used for?

What are marine ingredients used for?

The oceans contain approximately 80% of the earth’s biomass and have great potential for nutritional, therapeutic and functional ingredients.  Marine ingredients are used in a range of products intended for animal and human consumption, food processing, blue biotechnology, as well as alternative purposes such as cosmetics.  Fishmeal and fish oil were traditionally considered to be one of the most important products derived from fish destined for non-food uses. They are the foundation of many global protein supply chains, and are key components of feeds for fish species (including crustaceans such as shrimp) in aquaculture, as well as pig and poultry feeds.  They are also recognised as having particular nutritional advantages in petfoods, especially in relation to welfare, and increasingly are used in these markets.  Fishmeal and fish oil are not just suppliers of crude protein and energy in the diet, although they achieve both in great measure.  The presence of numerous important micronutrients such as omega-3 fatty acids (e.g. EPA and DHA), amino acids, particular vitamins such as the B-group and vitamin D, and some key minerals (e.g. Ca, Na, K, and Se) are also considered to be important for physiology, growth and health in farmed animals.  For some of the major farmed fish species such as salmon, trout, seabass, and turbot, the nutrients present are close to those of the content of the wild diet, and therefore also support the nutritional quality of the end product.

Recent innovations and developments on non-food fish and especially on by-products from food fish production have led to a number of new marine products such as bio-active compounds, marine proteins and food processing aids.  Seafood processing generates vast amounts of by-products such as trimmings, fins, frames, heads, shells, skin and viscera which are an important resource and can be converted and utilised as valuable products.  The utilisation of by-products is essential because it eliminates waste whilst also increasing efficiency through value addition. 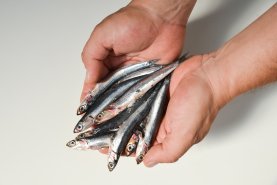 What are forage fish?

What are forage fish?

Forage fish are typically the small pelagic species such as sardines, anchovies, mackerels, and sprats that occupy positions low in marine food chains.  In many instances the markets as food fish are not strong, often on account of resistance to taste and texture of the species.  Through their use as a raw material and being diverted into fishmeal and fish oil production, they make a substantial contribution to global protein production. 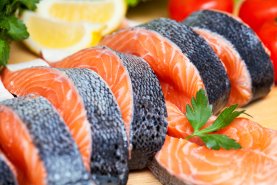 Is it right to feed fish to fish?

Is it right to feed fish to fish?

The use of small species of fish as farmed animal (including fish) feed is important for global food security and is entirely appropriate if the source fishery is well managed and does not deprive local communities of good quality food for which there is a demand.

Recent reports in the media and from some lobby groups have misrepresented the value of small fish and ignored the good management practices now in place in many fisheries and improvement projects driven by market demand. Claims that it is wrong to feed fish to (farmed) fish ignore the decreasing amounts of fishmeal used in feed, the increasing amounts of fishmeal recovered from the by-products of fish processing that would otherwise be waste, the lack of markets for direct human consumption of small, bony fish that are otherwise well managed and abundant and remove incentive for improvement in fishery management.

It is also important to remember that the natural diet of many farmed fish species is predominantly other fish which provides them with the optimal nutrition. The use of alternative non marine sources of protein and oil can carry anti-nutritional factors which compromise growth and fish health. To date, only marine ingredients provide the long chain Omega 3 oils in farmed fish that are important for good human nutrition.

However, the increasing knowledge of the inter-relationships within ecosystems should be taken into account when setting future fishery management guidelines for the benefit of the fishmeal and fish oil industry and the environment on which it relies. 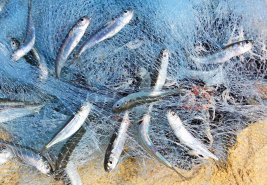 What are the main sources of marine ingredients?

What are the main sources of marine ingredients?

IFFO, through work commissioned with the University of Stirling, estimates that currently 67% of the raw material supply for fishmeal and fish oil comes from whole fish, with 33% from byproduct.  The small pelagic species that occupy the majority of the whole fish proportion are dominated by the Peruvian anchovy, Engraulis ringens.  Peruvian anchovy provides enough raw material to account for 15-20% of the global annual production on any given year.  Other important species are the Atlantic and Gulf menhaden in the US, and various sardine, sprat, mackerel, sandeel stocks around the world.  The trend is for an increasing contribution to be met through byproduct raw material, and as aquaculture grows, the availability of this material should improve over time. 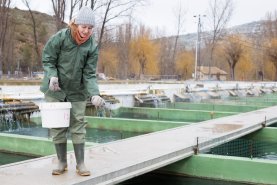 Is the use of fishmeal and fish oil sustainable?

Is the use of fishmeal and fish oil sustainable?

The fishmeal and fish oil industry believes it is necessary that feed-grade (ie.industrial) fisheries continue to be controlled and managed, based on good quality data capture and sound scientific advice in order to maintain this resource in a manner that is biologically, environmentally, economically and socially sustainable. To this end the fishmeal and fish oil industry is fully supportive of any official Government fishery policy which will achieve the above objectives. In order to help producer’s demonstrate their responsible raw material sourcing, IFFO developed the MarinTrust Standard, an independent third-party audit and certification programme. 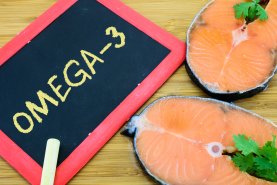 What are the health benefits of omega-3's for humans?

What are the health benefits of omega-3's for humans?

Oily fish are the major source of omega-3 fatty acids EPA and DHA, which are now recognised world-wide as a key factor in human health.  A major part of the oily fish caught is inedible. Thanks to fishmeal and fish oil production, EPA and DHA contained in these fish can be returned to the human food chain via fish oil supplements, as well as via farmed fish and even livestock.

EPA and DHA found in fish oil has been the subject of numerous studies showing they confer several health benefits which are well documented (see table below).  Regulatory and expert scientific bodies generally recommend 250-500mg of EPA and DHA per day for primary prevention of chronic diseases.

EPA and DHA are especially important for pregnant women because these essential fatty acids are key to foetal brain development and could help with the prevention and treatment of postpartum depression.  It has also been shown to be beneficial for development of babies/infants - especially for the nervous system including brain and eyes. 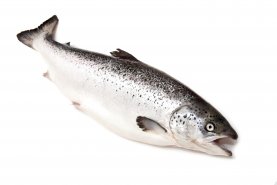 How many fish does it take to grow a farmed salmon?

How many fish does it take to grow a farmed salmon?

Fishmeal and fish oil were majority constituents of salmon feed in the early days of aquaculture, but the industry has developed over time to the extent that the proportions of these materials are much lower than many of the other ingredients.  The salmon farming industry is widely accepted as a net producer of marine protein in that it is now at the stage that less volume of whole fish are used in the feed than the volume of farmed salmon produced.  This is the result of the development of feeds by the aquafeed industry over time.  Even so, it is important to recognise that fishmeal and fish oil remain essential components of salmon feed, even though inclusion rates are very much lower than they were in the 1990s for example.  IFFO’s most recent calculation for salmonids, based on 2015 data, indicated that for every kilogram of salmonids (salmon and trout) produced, 0.82 kg of whole fish was used in the feed. 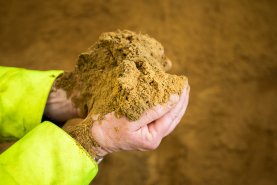 What are antioxidants and why are they used in fishmeal?

What are antioxidants and why are they used in fishmeal?

Antioxidants are added at the end of fishmeal production as an important part of the process.  Fishmeal contains a proportion of fats, many of which are the polyunsaturates such as the long chain omega-3 fatty acids such as EPA and DHA.  The use of antioxidants for the stabilisation of fishmeal is essential to manage the risk of oxidation (and possible self-heating) and to preserve this important scarce resource.