What might climate change mean for the inter-relationship between fisheries and aquaculture?

This article was initially published in FishFirst (China), May 2021 Edition

Where fisheries and aquaculture link

It has been suggested that not all climatic changes are likely to equally impact fisheries and aquaculture, either directly or indirectly (1,2). Changes such as increasing temperatures, rising sea-levels, changes to ocean productivity, meteorological patterns and weather intensity have all been suggested to have significant disruptive potential. However, one of the more indirect impacts of climate change on aquaculture extends from its link with fisheries. Fisheries and industrial aquaculture have been inextricably linked since the latter’s inception in the later part of the 20th century. While arguably there are a suite of linkages between the two sectors, the strongest linkage has been through the capture of fishery resources for the production of fishmeal and fish oil for use in feed production, a link that continues to this day. Given the numerous commentaries about how global climate change might influence various fisheries (1), such impacts might also extend to aquaculture.

Projected impacts on fisheries from climatic shifts are suggested to result in some “winners and losers” based on changes in total biomass, species diversity and potential catches (2,3). There has already been some impact observed on several global fisheries and there are primarily two key biological dimensions to this: stock abundance; and distribution (2). As an example, studies have shown that a large proportion of species in the North Sea are already shifting in distribution or depth or both since the 1980’s. Of those species in the North Sea that have been impacted by climatic change, more than half have shown changes in distribution, and all but one of those species has moved northwards. Further, such geographic changes may result in some significant impacts on commercial fisheries and that this could lead potential conflicts in resource access (4,5). In the northern Atlantic, several models have examined scenarios of environmental variability and climatic change with respect to those species that underpin the largest fishmeal/fish oil industries. Some species, such as mackerel and sprat are forecast to increase in abundance under the different climate change scenarios modelled, whereas other species like herring and blue whiting show increases under some scenarios but decreases under others (6,7). The main drivers of such changes are predicted to be temperature and primary production. The potential catch from the north Atlantic is projected to increase overall, with changes in local abundance within the greater geographic area. The effects of such climatic changes are not forecast to be consistent across the globe, with declines in maximum catch potential significantly heightened closer to the equator (Figure 1).

A notable contrast to the north Atlantic scenario is that of the southeast Pacific, where the situation appears more significant. The Peruvian anchovy fishery has been predicted to be sensitive to future climatic shifts (8). It is a fishery that is already regularly subject to distinct marine heatwaves in the form of El niño events, where there is a known negative impact on productivity of the fishery.  It possibly heralds some kind of premonition for what a future hotter ocean might hold for the world’s largest fishery.

Effects of climatic variability on fishmeal and fishoil supply

The productivity and revenue potential from any one fishery or even the entire sector hinges on a myriad of assumptions. While the price of fishmeal and fish oil was observed to be closely linked to that of crude oil up until 2006 (9), increasing demand and supply constraint drivers became dominant after that point. Additionally, the aquaculture sector has developed considerable resource resilience since that time, learning to adapt to using a wide range of other resources (9). Fish oil, however, remained relatively unique compared to many of those additional resources because of its high levels of omega-3 long-chain polyunsaturated fatty acids. More recently, progress with biotechnologies producing those important long-chain omega-3 from plants and microbial sources has rapidly progressed to a point where they are beginning to gain commercial traction (10). Suggestions have been made that impacts of climate change on aquaculture may be brought about by limitations on fishmeal and fish oil availability. It is important to note that this appears to be regionally variable, and that similarly other types of alternative raw materials (e.g. soybean and wheat crops) might be just as affected and therefore climate change effects may not solely be a fishery linked issue for aquaculture. It has been suggested that the negative impacts are likely to be felt mostly by aquaculture sectors in the temperate regions, where the finfish aquaculture is based predominantly on carnivorous species (1). However, the recent adaptations of those industries to rely more on additional resources likely to complement fishmeal and fish oil, coupled with the observation that most tropical aquaculture relies even more heavily on crop derived resources questions this claim. Indeed, aquaculture has been reliant on non-fishery resources for some time (Figure 2) and there is further evidence now that questions the sustainability of using plant protein resources in aquaculture feeds (11). With increasing rates of technological change across the aquaculture feed sector there has been weakening links between fishmeal and fish oil supply with many of those aquaculture sectors based on carnivorous species now showing a clear reduction in the reliance on fishery resources. A trend further evidenced by the observation that in 2018, for the first time in thirty years, the North Atlantic aquaculture sector imported no fishmeal from South America.

Irrespective of the extent of climate change into the future, with fishmeal and fish oil rapidly moving from being bulk commodity products to becoming high-value strategic ingredients, it is likely that the link between fisheries and aquaculture will increasingly weaken. While it is unlikely that this link will ever cease to exist, it is clear that the effects of climate change on fisheries will be less of an issue to aquaculture as the 21st century progresses.

Figure 1. Forecast changes by 2050 on the maximum catch potential (MCP) and maximum revenue potential (MRP) relative to 2000 across each of 280 exclusive economic zones. Figure from Lam et al., (2016). 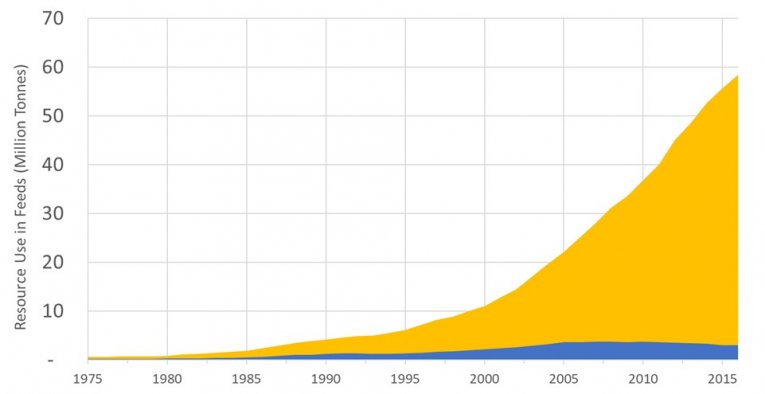 Figure 2. Fishery (blue) and non-fishery (yellow) resource use (million tonnes) by the aquaculture feed sector from 1975 to 2016. Data derived from FAO FishStat (2018).