This piece was initially published in FishFirst - June 2021 edition, as a result of its partnership with IFFO.

Fishmeal has long been valued for its high-quality protein content and excellent balance of amino acids. However, another valuable component often overlooked is their lipid content. The lipid content of fishmeals is not only rich in the same omega-3 that make fishoil so valuable, but these fishmeal lipids are also present in an enriched, and more biologically active form as phospholipids. Furthermore, these omega-3 in fishmeal and fishoils have significant advantages over grain derived omega-3. Why is this important and what does it mean for the value of fishmeal? Read on.

FISHMEAL COMPARED TO FISH AND OTHER OILS

During fishmeal production, most of the lipids in the fish biomass are removed during processing and separated out as fishoil, which on a weigh-by-weight basis is more valuable than fishmeal. However, a residual amount of lipid remains in the fishmeal that is biochemically slightly different from that found in the fishoil fraction and those lipids found in most vegetable oils. While fishoil and vegetable oils are nearly all triglycerides, which is the biochemical form in which fats are stored as energy reserves, fishmeal lipids by contrast are on average about 25% phospholipids which are a structural lipid form (Figure 1). This level of phospholipids can be as high as nearly 40% in some fishmeals and as low as 13% in others. Phospholipids themselves can also be quite diverse and complex in their structures and contribute to a variety of important biological functions in animals. 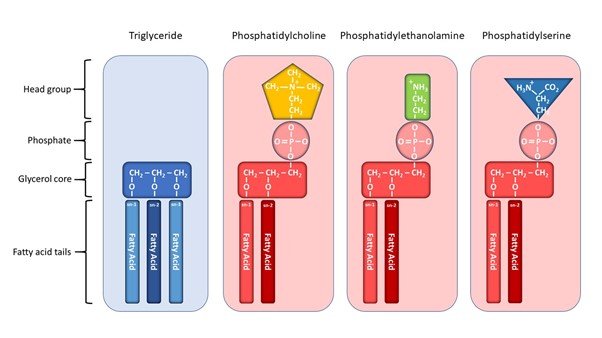 Phospholipids are considered more biologically active than triglycerides for several reasons. Firstly, they are more easily digested and absorbed due to their better ability to mix with the interface between water and fats, a term referred to as emulsification. They also play a role in the formation of special molecules called micelles, which assist the uptake of lipids into the cells of the intestine.

Fats and other lipids are typically difficult for animals to digest. Not only do they need to be broken down by various enzymes like most nutrients, but they also require a natural detergent called bile to help emulsify them and increase their reactivity with the digestive system. Phospholipids not only do not need as much assistance from these bile molecules, but they also help the bile emulsify the triglyceride fats and aid their digestion. In effect the phospholipids act like a built-in emulsifier to help the rest of the fat be better digested and absorbed. For some animals, like shrimp, phospholipids are critical because these animals do not produce any of the bile molecules and as such species like shrimp are more heavily reliant on phospholipids in the diet to help emulsify what fats they eat.

One of the main roles for phospholipids is that they contribute to the membranes on all cells where they affect the function of those cells. Part of the reason for this is due to the structure of phospholipids, which contributes to these molecules having the chemical property that makes them have affinity for both water and fats simultaneously and causes them to self-assemble into membranes and molecules called liposomes. Additionally, the different types of biochemical structures on the headgroup of phospholipids gives them a range of properties (See Figure 1). Structures like choline and inositol both have vitamin-like activities in most animals.

THE LONG AND THE SHORT

The range of different fatty acids that come with the lipids in fishmeals are usually quite similar to the fishoils that come from those same species. However, the fatty acids from both fishmeals and fishoils are quite different from those found in vegetable meals and oils. The main difference is the contrast in type of omega-fatty acids present in the different resources. Fishmeals and fishoils are traditionally high in the long-chain omega-3 fatty acids like DHA and EPA (Figure 2). It is these DHA and EPA omega-3 fatty acids that have been linked to so many different positive features in human and animal health. By contrast vegetable meals and oils are high in the short-chain omega-6 fatty acids like LOA (Figure 2). These omega-6 fatty acids have been linked to inflammation and some negative aspects associated with human and animal health. However, some vegetable meals and oils, like rapeseed, camelina and flax do have appreciable levels of the short-chain omega-3 fatty acid alpha-LNA (Figure 2). This short-chain omega-3 has some positive benefits, but usually only when bioconverted to the more biologically active DHA and EPA, and not all animals can make that conversion. 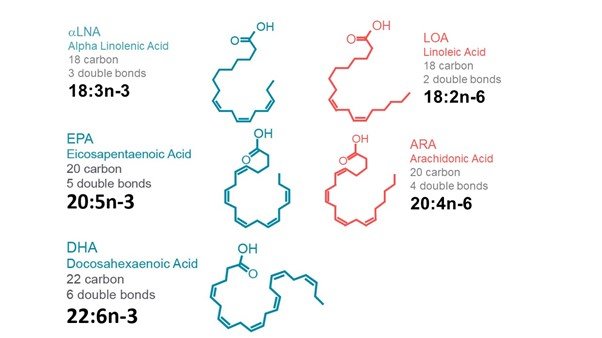 Figure 2. The distinction between the short and long-chain omega-3 (blue) and omega-6 (red) fatty acids.

Generally, fishmeals are valued on their protein content. Sometimes this valuation might extend to considering the pro-fat (protein+fat) content and other factors like volatile nitrogen and histamine levels, but rarely some of the more subtle complexities. However, the feed industry well knows about this hidden value of the phospholipids in fishmeals and the enriched levels of the omega-3 they contain. Given that fishoils are worth more than fishmeals per tonne, largely driven by their omega-3 content, then perhaps we need to reconsider the value of the omega-3 content of fishmeals as well, so the hidden value becomes less hidden?