With 25 years of experience each in the feed sector, the purpose of this discussion was to pool together their knowledge on fishmeal and feed and identify the unknowns and gaps of knowledge that are still to be explored.

The evolution of feed from 30 years ago has been great, from fishmeal inclusion rates of 50-70% to now where levels are greatly reduced to fishmeal being used as a strategic and functional ingredient, and no longer a major ingredient in terms of their inclusion levels. There are studies published constantly on fishmeal replacement but as Bureau noted “it’s not about replacement but effective inclusion, about knowing what the animal requires. Fishmeal is no longer a dominant ingredient and other replacement ingredients are often more expensive and less sustainable.”

Another common point of confusion is seeing fishmeal, or any other ingredient, as a single product. There is huge variability between differently sourced fishmeals, allowing their strategic use to be identified and tailored. Glencross noted that “research papers often fail to mention the grade of fishmeal used, we need to understand the diversification of the product. Marine ingredients industry is becoming a bespoke sector selling a specialist strategic ingredient.”

Starting with the knowns, the components of fishmeal that we already understand and measure, Bureau noted that “fishmeal has all the positive components and is a more rounded ingredient when compared with others.” A comparison of components with plant proteins is show below (Figure 1.). 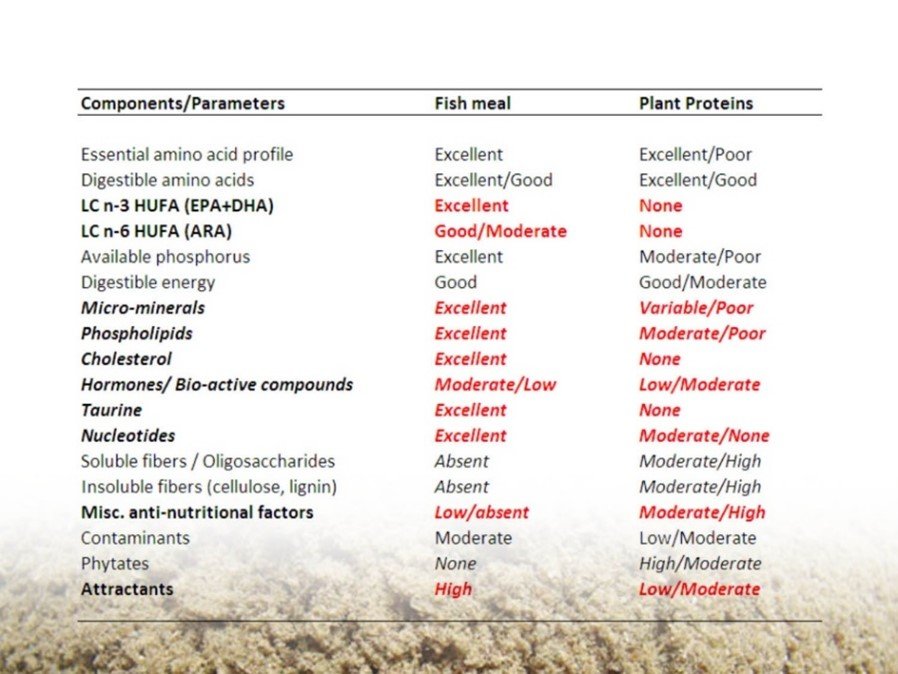 Looking at reducing fishmeal inclusion rates in feed, Bureau referenced a previous study with rainbow trout, which showed that reducing fishmeal reduced growth rates, and without animal proteins at all, the fish were simply not growing as fast, and they performed considerably lower than commercially grown fish. Without fishmeal the full growth potential of the animal was not reached. 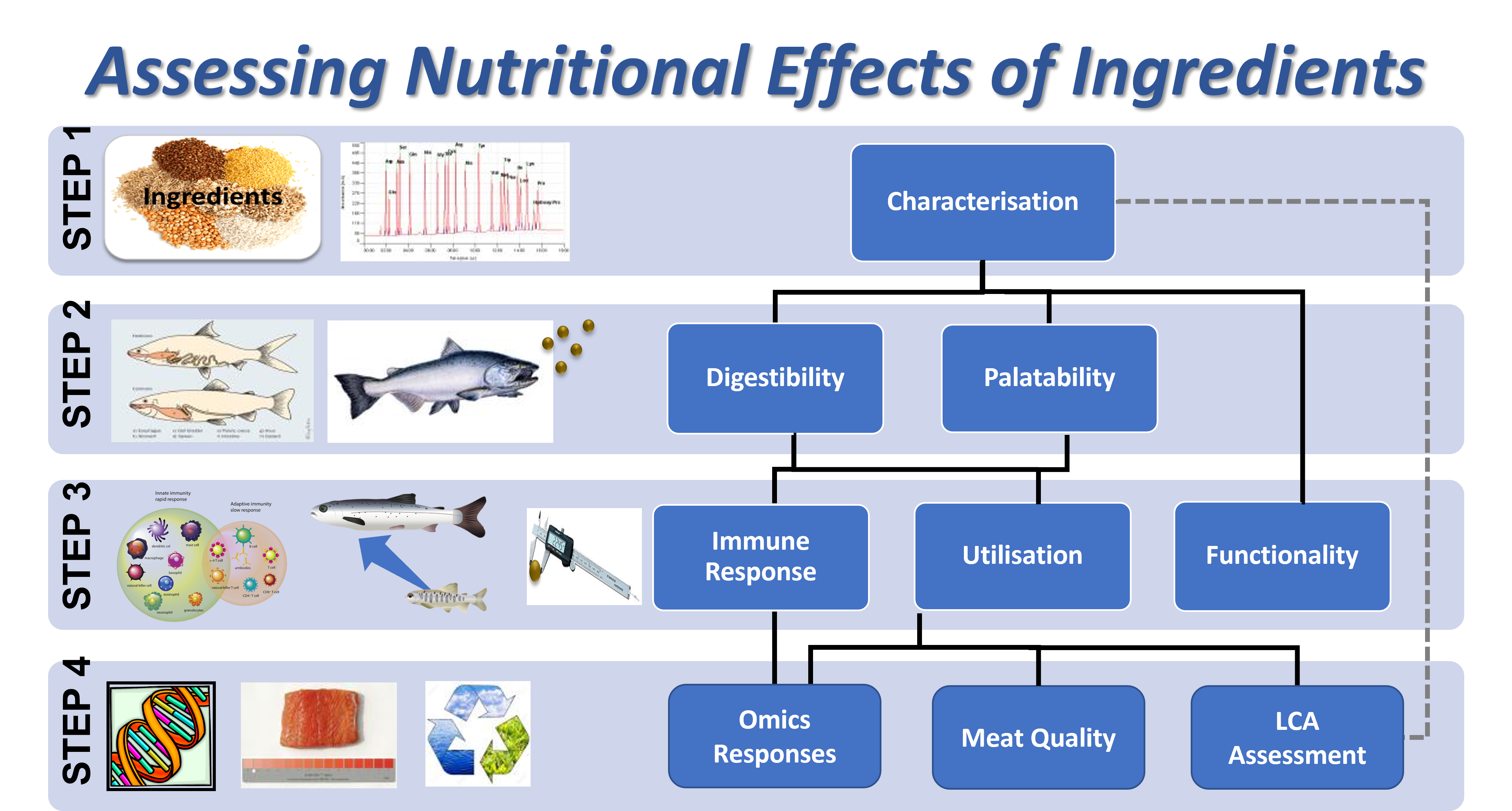 In an effort to refine and improve feed formulations, Bureau highlighted the International Aquaculture Feed Formulation Database (IAFFD), a free resource that has commercial nutritional specifications for each species across different life stages. These databases generate a reasonable set of requirement estimates, but feedback from farmers is requested to improve the accuracy of the data.

Glencross noted three primary points of interaction following an animal being fed; feed intake, digestion and utilisation or growth. He noted that in his trials, he has experienced a threshold of around 15% fishmeal inclusion and less than this caused a sharp drop in intake and growth. When both fishmeal and fish oil were removed, survival rates dropped significantly. Intake and palatability, remain the first and most important hurdles and need to be monitored in both the short and long term due to effects on metabolism and life stages (Figure 3.). Notably, palatability responses tend to become most prominent in the first couple of weeks. After that animals can compensate as longer-term nutritional drivers (e.g. hunger) begin to override the palatability side of things. Palatability challenges vary across species, for example catfish consumed a soybean meal diet but had a 20% lower growth rate. 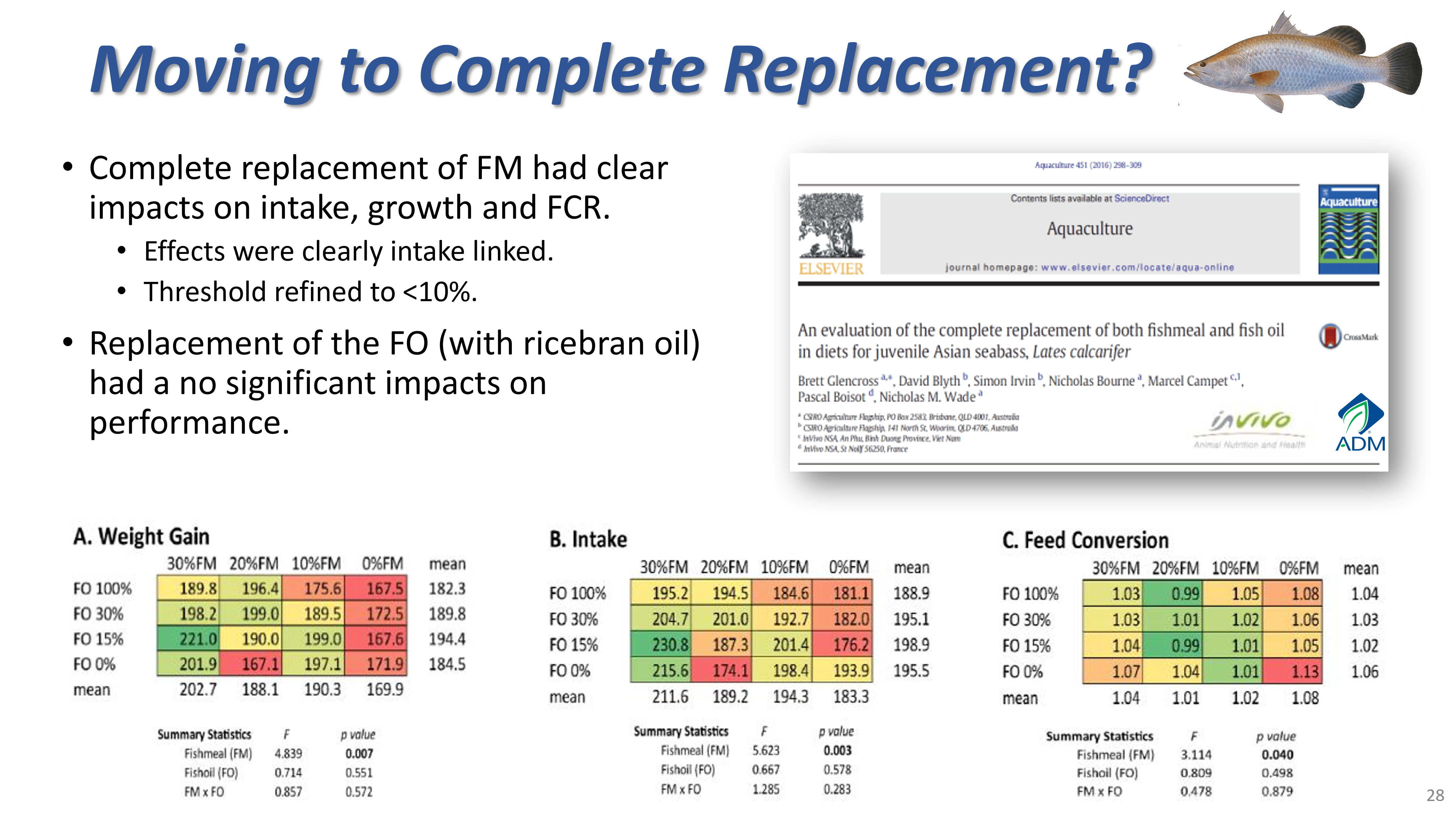 Beyond the known components, fishmeal still has an X factor which remains unanswered. Bureau labelled “fishmeal as a good insurance policy to maintain quality fish feeds and ensure healthy fish, thanks to these unknown qualities”. Bioactives, of an insoluble protein origin, in marine ingredients may be the answer and have been reported in some studies. Other potential candidates include the effect of natural hormones in the fishmeal on the fed fish, with these impacting certain species more than others. Crustaceans, such as shrimp, greatly respond, usually observed as an increase in growth rates, possibly thanks to the bioactives in the feed. For this reason, it has been common practice in the shrimp feed sector to include some crustacean meal (e.g. krills meal) in feeds. On this Bureau responded that “we cannot rush to conclusions, we don’t have perfect understanding of the value of the ingredients or the requirements of the animal, so we need to be cautious”.

The financial component of feed variation cannot be ignored. The best feed will not always make a farmer money, in the end money is made by the selling the final product, but quality is key and replacing too much fishmeal can impact this. There remains a need for additional (low cost / high volume) ingredients due to the finite constraints of marine ingredients and their strategic use is likely to increase in importance. Glencross concluded by saying that “marine ingredients are natural products that provide a complexity of nutrition with knowns and unknowns that unexpectantly aid nutrition, but we need to know more.”