Measuring the “footprint” of oils

This piece was published in International Aquafeed Magazine (August 2022 edition)

One of the qualms we often see around fish oils is their perceived lack of sustainability, with many of the alternative products being touted as being more “sustainable”. So, I was intrigued recently to read a new paper by McKuin et al (2022) who reported a comparative lifecycle assessment (LCA) approach for a suite of different microalgal (Schizochytrium) products against each other and against fish oil. The great thing about using such an LCA approach to assessing the sustainability of an ingredient, from my perspective at least, is that it provides a clear point of objectivity about the process. So there is less rhetoric, and more clarity in the claims being made about what one means when we use words like “sustainable”.

The study by McKuin et al (2022) proved to be a useful examination of the various inputs and processes from “cradle to factory-gate” of producing different Schizochytrium products and their impacts on the various LCA parameters. Notably the study identified that one of the biggest driverc of the “carbon footprint” for these Schizochytrium oils, was the need for input of sugar (sucrose) as carbon source for driving the production of these heterotrophic organisms.

The authors compared the production of Schizochytrium in two geographic regions (Brazil and the USA) and as either two different products, one as a dried whole-cell product and the other as an extracted oil. Even different oil extraction methods were considered. Most likely this was done to reflect the main commercial production of such products in the global marketplace. And importantly, the allocation elements were done on an economic basis making the work directly relevant to the accepted norms for the feed sector as based on the product environmental footprint categorization riles (PEFCR) from the European Union. Overall, I thought it was an excellent and comprehensive piece of work.

But what struck me as odd was that the authors presented the comparative data against fish oil based on the Schizochytrium oils being diluted with canola (rapeseed) oil. It was indicated that this was done to provide a DHA (22:6n-3) parity basis across products, though perhaps more relevant would have been to provide that parity on a total long-chain omega-3, basis as that is the basis by which such oils are traded. Or even as a simple mass-basis for each product so any formulator can readily see the overall contributions based on how the different products might be applied to a feed formulation. Notably though, a simple review of global warming potential (GWP; a.k.a. carbon footprint) data from the Global Feed Lifecycle Assessment Institute (GFLI) database, shows that fish oil in its own right can have quite a variable carbon footprint with more than a 100% difference between the highest and lowest estimates, but that the carbon footprint of canola oil is about three times greater still than that of the average fish oil value (Figure 1). So, if canola oil is being added and respectively diminishes the absolute carbon-footprint of Schizochytrium oil, then the footprint of the product neat must clearly be something considerably larger. Despite this complication of the canola oil dilution, the authors still clearly mentioned that fish oil had “significantly lower impacts across environmental indicators”. So, clearly this would suggest that head-to-head fish oil is a more sustainable product when considered objectively. Maybe that’s the critical take-home message here? 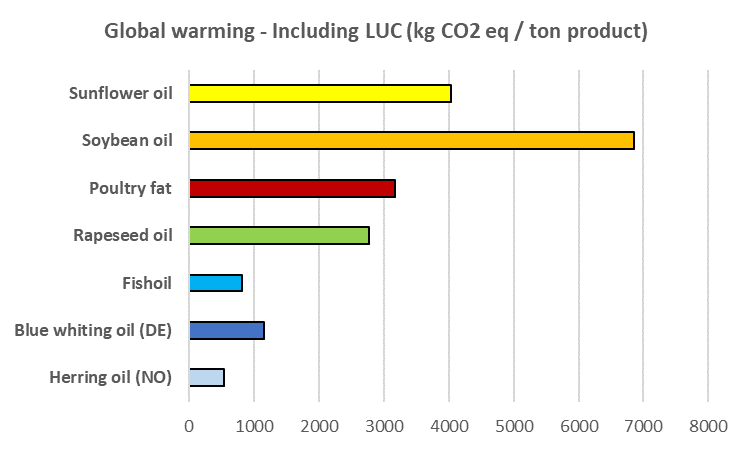