The fisheries that supply whole fish into fishmeal and fish oil production are on the whole for species of fish for which the market is weak, or in some cases non-existent.  The managed harvesting of these stocks to provide fishmeal and fish oil utilises a natural resource for food production that would otherwise go to waste.  They are therefore a cornerstone of global food security, producing high quality protein from a natural resource that, other than good fishery management principles, does not require the anthropological inputs to enable production that other feed ingredients require in the terrestrial environment.  Wijkstrom (2012) explores the subject of fish used as feed in some detail, concluding within the text of an FAO document that the “the practice of using fish as feed is viable, that is, use of fish as feed is capable of surviving as a practice during coming decades”.  One key point in the discussion of this paper is the text that reads: “In respect of “food grade forage fish”, it does not seem as if the fishmeal industry is withdrawing fish that food fish markets could have absorbed. The reverse seems to be the case: fishmeal plants make use of fish that the fresh fish market and the fish processing industries cannot absorb. This is definitely the case for the 8–10 million tonnes of fish that are processed yearly into fishmeal in Peru and Chile. It also seems likely to be the case for several of the “food-grade forage species” caught elsewhere.” This is such an important point that it cannot be under-emphasised.  There is continual misunderstanding about the raw material supply into fishmeal and fish oil production, and that misunderstanding is based around the idea that the whole fish used are being taken from the direct human consumption market.  This is completely incorrect.  Those wishing to know more about the rationale for using these resources are advised to read that text.

Which fish are used

Predominantly the species used for fishmeal and fish oil production are the small pelagic fish species, often also known as “forage fish” due to their position in lower trophic levels in marine ecosystems.  Many feed directly on phytoplankton or zooplankton species, and are important in providing prey (food availability) for the higher trophic levels in those ecosystems (Englehard, et al., 2013).  Under the right environmental conditions stocks of forage fish populations can be highly productive, and some researchers emphasise the importance of the environment, rather than fishing pressure, in driving total stock biomass, assuming appropriate management is in place (Hilborn, et al., 2017). 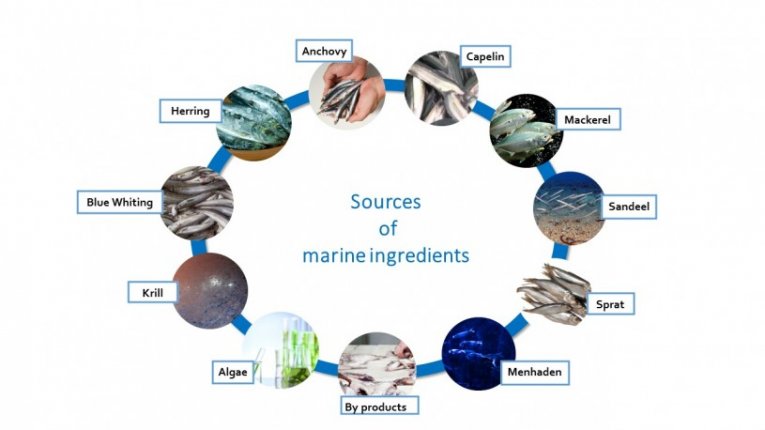 Wijkstrom (2012) also provides an overview of the key species used as whole fish in fishmeal and fish oil production, splitting the species into industrial-grade, food-grade forage fish and food-fish.  These most important species are listed below:

The management of these stocks is typically based on systems and approaches that allow for the inherently variable productivity that results from a range of factors including the species’ life history and the prevailing environmental conditions for the stock in question.  An obvious example of the influence of environmental conditions is the productivity of the Peruvian anchovy, or anchoveta, stock, where negative impacts on stock biomass by El Niño events in the South Pacific are well-documented (Ñiquen and Bouchon, 2004).  Management approaches are, at least in some instances, becoming quite sophisticated, and increasingly are able to account for some of the natural variability.  Scientific developments indicate that different approaches to different species and stocks are the way to maximise yield, and tailored approaches could well be the way forward (Sipie et al., 2018).  However, one thing that management strategies do have in common is the setting of harvest control rules (HCRs) to ensure that enough spawning stock biomass remains in the water to ensure successful spawning populations and future recruitment of juvenile fish into the fishery, thereby ensuring that the fishery remains productive over time.  HCRs are based on access to good data on the stock in question and bring into account ecosystem and environmental effects on the fishery (Kvamsdal et al., 2016).  Ultimately, it is in everyone’s interest to ensure that the population of forage fish stock in the fishery are not exploited above the limits that ensure continued productivity.  The concept of Maximum Sustainable Yield (MSY) remains very much central to fishery management principles and is adopted across, generally, across the forage fish stocks.

The great majority of fish that go into fishmeal and fish oil are caught by purse seining or mid-water trawling, where single species such as Peruvian Anchoveta are targeted. An exception to this is in South East Asia, where catch from bottom trawling does catch a mix of species that are then divided up once landed and a small portion goes to aquafeed.

A lot of the challenges in modern fisheries management occur in fisheries where there are mixed stocks of fish.  In these fisheries the setting of quotas for individual species can sometimes result in the accidental catch of non-target species, and this is the background to the subject of discards in the EU, addressed within the Reform of the Common Fisheries Policy.  There are many more fisheries where this issue occurs, and it is an issue that is central to some of the stocks in SE Asia (Ref, SEA report).  Where there are many more exploited stocks within a fishery, there is clearly much more complexity to modelling, setting of quotas, enforcement and management of stocks in general.  In contrast, the small pelagic species are characterised in many instances by single species that dominate the fishery.  In contrast to fisheries supplying raw material into the fishmeal and fish oil industry generally, these stocks are slightly less complex to model, and there are continuing improvements in the approaches being taken (Yatsu, 2019).  Of course we are still talking about natural resources which are subject to fluctuations driven by numerous factors, but in essence they are comparatively less complex to manage than the standard mixed stock food fisheries.  The importance of stock assessments and accurate data on which to base management strategies cannot be over-emphasised, and this has recently been highlighted as one of the most important aspects of longer-term successful fishery management (Hilborn, et al., 2020).

In addition to the (often) dominance of single species in a fishery, the life history and biology of many of these species carry aspects that support very high productivity.  Typically these are fast growing fish that mature early, and which are highly fecund producing large egg numbers.  When conditions are right productivity can be extremely high.  Temperature is an important factor in recruitment, as well as food availability, ocean current systems, and even behavioural aspects such as the time taken to exhibit schooling behaviour in avoidance of predators (Somarakis et al., 2019).  There are potentially many factors that may influence stock biomass, and many of these can have effects that exceed those of fishing pressure.

Strategic use of valuable resource

Finally, it is important to look at these fisheries in connection with longer term productivity.  There have been incorrect assumptions that, due to the essential nature of fishmeal and fish oil’s use in aquafeed, the continued growth in aquaculture will apply increasing pressure on the fisheries from where the raw material for the products is sourced.  With global annual production of fishmeal and fish oil relatively static for at least the last 20 years, this is clearly untrue.  Research performed by the feed companies and some academics has permitted other ingredients to be used in supplementation of fishmeal and fish oil, thereby extending the utilisation of the finite supply of these important ingredients.