As COP26 approaches is it time for less “turf” and more “surf”?

In November this year, in the city of Glasgow in my adopted home country of Scotland, the world will convene at COP26 (26th United Nations Climate Change conference) to consider a range of collective efforts to address future climate change. The science is clear on how we have arrived at this point – centuries of carbon pollution. While there are many different origins of this carbon pollution, it is notably the emission of carbon dioxide and other greenhouse gas (GHG) inputs into our global system from food production that is one of the main drivers.

In addressing the discharge of GHG’s there are many different strategies we can adopt. Clearly a reduction in global food consumption through reducing our calorie and protein intake and/or population reduction is one strategy that no one seems to want to talk about. However, most of the focus appears to be placed on reducing GHG emissions through a reduction in fossil fuel use and the capture of those emissions that we still produce to try and achieve a net zero balance. Improving efficiencies of resource use are another central theme. In this regard the use of “circular” protein and lipids has emerged as a priority strategy in animal protein production, but notably the only one with any scale (pardon the pun) and acceptance is the use of fishmeal and oil from trimmings and by-products. In fact, I had discussed in the August edition of this column in International Aquafeed how the original marine ingredient focussed strategy we used to use was one that in reflection had a pretty good environmental footprint; low CO2 discharge, low energy use, and little to no reliance land or freshwater. Compare that with the various alternative proteins and oils now being used and/or considered and we find that they typically have a comparatively high demand for energy, high CO2 footprint and used substantially more land and freshwater in their production. So even though they contribute desperately needed new nutrients into our feed-chain, this is not without some collateral cost.

The use of (vegetable or animal) oils in aquafeeds is one clear example of the GHG footprint associated with ingredient use (Figure 1). After reviewing the scientific literature, I found that there has been a proliferation of lifecyle assessment (LCA) studies on the GHG footprint associated with different oil production options and they often seem to contradict one another in their assessments and outcomes. Thankfully there has been some standardisation of the “rules” for LCA studies in recent years, with agreed methodologies being standardised by the international standards organisation (ISO; https://www.iso.org/standard/37456.html) and the global feed lifecycle assessment institute (https://globalfeedlca.org/) among other organisations. One outcome of this has been the recognition that fish oils have particularly low GHG footprints. Interesting was the observation that the various microalgal oils being produced can have widely varying GHG footprints, depending on what source of carbon they use to fuel the growth of the microalgae.

However, the use of a broader range of ingredients brings some advantages to the feed sector, in that it is then less reliant on any one ingredient and so there is more resilience to supply chain threats. However, plant proteins also bring some sustainability challenges to address. Malcorps et al., (2019) showed that plant proteins typically have a much higher footprint in many other sustainability areas than fish meal, and that their use in shrimp feeds has pushed the overall footprint of the feed up over the last 20 years. Irrespective of all these sustainability-footprint conundrums, this whole issue of sustainability and carbon footprint is going to become increasingly of interest to society as the impact of food production systems has been widely and publicly highlighted. No doubt as we get closer to COP26 this interest will further escalate. Fortunately, a recent study by MacLeod et al., (2020) has shown that in fact aquaculture is in a very good position, being a typically low GHG emitter compared to other animal production systems. Maybe this is a message we should be sending to COP26? 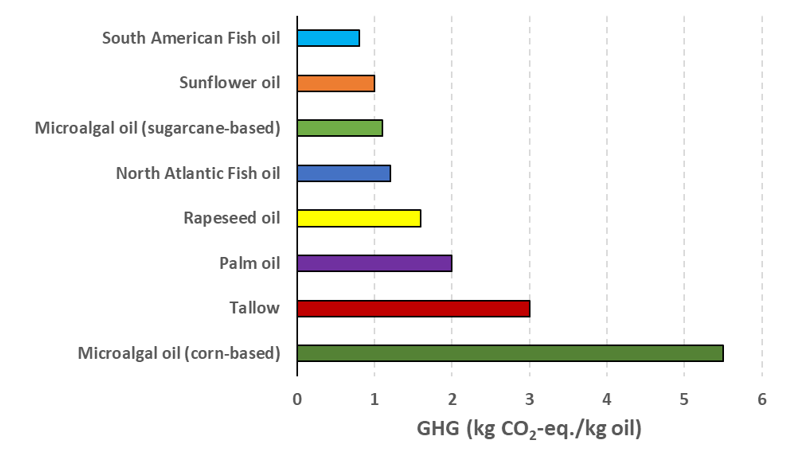 Figure 1. A summarised representation of the CO2 emission equivalents from the production of a kilogram of each of various oils used in aquafeeds to their point-of-distribution. Data derived from GFLI and BioMar.