This piece was originally published in International Aquafeed, May 2022 edition.

I recently came across an interesting study examining the cumulative impacts of human activity on marine ecosystems which provided some striking clarity on the various threats to our oceans. In this study by Halpern et al (2019) the authors examined the cumulative impact related to 14 different stressors (e.g., climate change, fishing, terrestrial pollution, etc) and how these impacted 21 different marine ecosystem types over an 11-year period (2003-2013). The authors also modelled these impacts on a spatial basis to provide some geographic context to the threats.

The results of the study provide clear and sobering perspective about the realities of human impact on our marine ecosystems. Predictably the authors found almost 60% of the world’s oceans are facing increasing (and cumulative) human impacts on each of the different ecosystems. What was perhaps surprising though was the limited extent to which fishing was perceived as a threat to these different ecosystems. This contrasts much of the media dialogue of the “seaspiracy” threats associated with fishing and aquaculture, when the reality it appears is more one of a climate change induced heatwave driving nearly all the change. 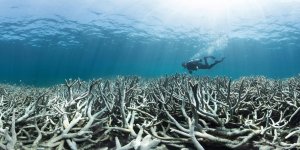 Of the ecosystems examined in the Halpern et al study, the three most vulnerable; coral reefs, seagrass, and mangroves each reported almost zero impact associated with any of six different forms of fishing activity. The BIG threats being those of sea surface temperature and sea-level rise changes. Taking note of this beyond the scientific models, I recently read further that Australia's Great Barrier Reef has yet again been devastated by another mass coral bleaching event (2). It was reported that this was the fourth time in six years that such widespread bleaching has been observed, where as prior to 2016 it had only been reported twice. So the perceieved threats are clearly not just perceived, but actually real events taking place around the world right now.

So if climate change is our biggest threat for ecosystem stability and future food production, what impact is there from our bluefood systems and how does this compare with the broader climate change stressors of terriestrial food production? A recent study by Gephart et al (2021) published a series of comparisons of fishery and aquaculture impacts related to various stressors and observed that for the most part green house gas (GHG) emissions per tonne of edible food for aquaculture was less than that of chicken production, whereas fishing on average was just slighly higher. Notably though GHG emissions from small pelagic fisheries (e.g., anchovies) were among the lowest of all activities, bettered only by seaweed, bivalves and production of some carp species. So if small pelagic fish represent not only an important nutritious resource, but are also one of our better options in mitigating climate change, surely sustaining their use makes both nutritional and climate sense?