A more sophisticated way of looking at Fish-In:Fish Out ratios (2020)

IFFO commissioned a report by Richard Newton (Aqua Horizons Consultancy), below is the report summary. The full report is available to IFFO members.

FIFOs (Fish In:Fish Out ratios) have been used over time as a way to look at the performance of aquaculture in relation to the wild fish that are utilised in feed.  FIFO is regarded by some as a benchmark of progress by the sector in relation to its environmental performance. IFFO commissioned Richard Newton (Aqua Horizons Consultancy) to look at the Fish In: Fish Out paradigm in a more sophisticated manner, one that shall take into account the true value of fishmeal and fish oil and their nutritional benefit in aquafeed.

Fish In:Fish Out ratios (FIFO) were first adopted as a concept in the early 2000s to account for the amount of marine ingredients used in aquafeeds. The idea originated from the scientific community as a means of identifying the use of material from capture fisheries that was used in support of aquaculture via feed in the form of fishmeal and fish oil (FMFO). At that time, aquaculture production was growing steadily, and there was some concern that increasing production, resulting in increasing feed volume demand, would add additional pressure onto the world’s fisheries harvests, for the stocks that provided the fish used as raw material for fishmeal and fish oil (FMFO).

There are some issues with the application of the FIFO approach.

Firstly, the focus on FIFO and the misapprehension that increased demand for FMFO would apply increasing harvesting pressure on fisheries assumed that those fisheries supplying the raw material for FMFO were unregulated. This is clearly inaccurate for the vast majority of the forage fish stocks supplying into FMFO production.

Secondly, FIFO as a concept does not take into account differences in aquafeed ingredients, and in ignoring the essential nature of the nutritional contribution of FMFO underestimates their importance, enhancing uninformed and incorrect assumptions that they are merely providers of protein and energy in feed. There are some key micronutrients in both materials that are either in relatively short supply (e.g. the marine-derived long chain omega-3 fatty acids, EPA and DHA), or their independent inclusion in feed is expensive and fishmeal is a particularly rich, and complete, source of these materials (e.g. specific amino acids such as methionine and lysine; B-group vitamins; minerals such as calcium, phosphorus, zinc; and some other compounds that have been linked to palatability and growth).  Looking at “Fish In” as a calculation of wild fish in aquafeed against total protein needs, makes the assumption that the ingredients are nutritionally equal, and this is incorrect – fishmeal is nutritionally superior to most, if not all, other aquafeed ingredients.

Thirdly, a crude calculation of Fish Out (FO) does not account for the broad range of additional products that may result from the non-edible portion of the farmed fish, and especially the separate bioeconomic value that these materials may hold. Considering these outputs are produced with the use of forage fish in the making of FMFO, that have non-existent or weak markets as food, the additional value generated through FMFO, hence aquafeed, and aquaculture, drives considerable economic and food security gains to society that would not otherwise exist.

Fourthly, a focus on FIFO combined with often negative perceptions about the use of FMFO that are portrayed by some critics, ignores the important contribution that byproduct raw material makes to overall FMFO production. It also ignores the growth in this segment’s proportion as byproduct will make an increasingly significant contribution over time.

None of the foregoing is accounted for within the current FIFO calculation, and it may be concluded that FIFO is a rather crude mechanism for measuring the utilisation of whole fish as raw material for FMFO.

IFFO commissioned a project with Dr Richard Newton looking at the FIFO concept in more detail.  Richard’s key findings for this project included:

Much detail is covered in the report, an overview of which is presented visually below: 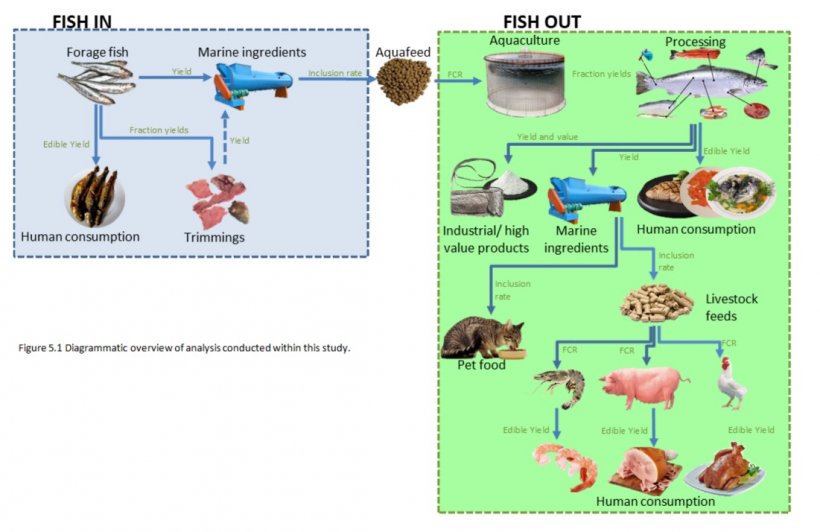