The Evolution of Sustainability metrics for marine ingredients - NEW

As the aquaculture industry has evolved over the years, so have the metrics used to measure the use of marine ingredients. By establishing relevant goals and measuring progress through clearly defined metrics, you can better demonstrate impact, effectiveness, and value. They can prove to be a powerful tool in demonstrating and communicating the use of ingredients, but they can also be misused and misunderstood so it's important to understand how they are calculated, what they cover and why.

Each can be seen as a building block towards a better understanding of the sustainability of marine ingredients, starting with the most simple Feed Conversion Ratio (FCR), moving to the well known Fish in: Fish out ratio (FIFO) and Forage Fish Dependency ratio (FFDR); and ending with the more holistic assessment: lifecycle assessment (LCA) analyses. Each is detailed below, including calculations and the reasoning behind them. The latest IFFO figures are also included under the relevant metrics (available via click to expand).

There are various versions of FCR, which is simply the conventional measure of livestock production efficiency, the weight of feed intake divided by weight gained by the animal or fish. There are two versions of FCR which are often used, eFCR and bFCR:

The FCR has the advantage in that it is conceptually quite simple; a comparison of salmon with an eFCR of 1.3 against chickens with an eFCR of 2 and pigs with an eFCR of 3, shows very easily the differences in efficiencies across different intensive animal production systems. 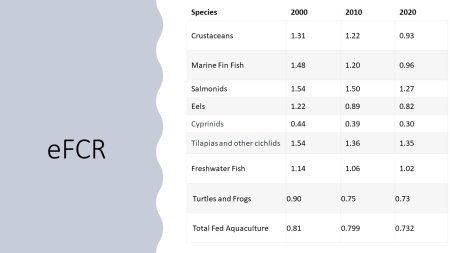 Fish In:Fish Out ratio (FIFO): how much fish is used to produce farmed fish

The FIFO (Fish In:Fish Out) ratio was developed as a way to examine the marine ingredient use during animal production, though most of the focus has been on aquaculture in relation to the use of wild fish in feed to produce farmed fish. FIFO is often used as simplified environmental benchmark and although it remains an important metric, it has limitations. These include its application to one sector/ingredient in isolation of a more global contribution, especially the value and quality of the ingredients. FIFO doesn't distinguish between by-products and reduction fishery sources. Replacing fishmeal and fish oil doesn't necessarily imply that those other resources are more sustainable or responsibly sourced.

The way that IFFO calculates FIFO ratios is based on the following: 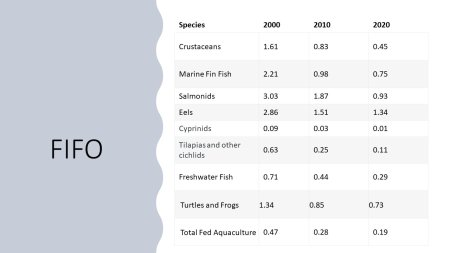 The Forage Fish Dependency Ratio (FFDR): based on the quantity of wild fish used in feeds

The Forage Fish Dependency Ratio (FFDR) is another simple metric for calculating the quantity of wild (forage) fish used in feeds in relation to the quantity of fed animal production. FFDR was originally developed as a way of attempting to quantify the environmental impact of feed use in aquaculture systems and there has been a particular attention on FFDR in salmon aquaculture. Like FIFO, the FFDR is expressed as a ratio that considers the amount of marine ingredients in the feed, but focusses on those that originate from forage fisheries. 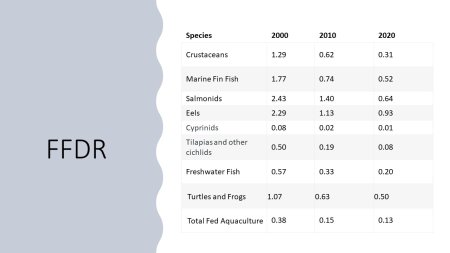 The economic Fish in: Fish out ratio is a more advanced method used to calculate the FIFO ratio based on the principle of economic allocation to the values of the fishmeal and fish oil used in the feeds.

More recently, the eFIFO (economic Fish In:Fish Out) has been proposed as an improvement to the FIFO (Kok et al., 2020). In the eFIFO, an economic allocation (weighting) has been applied to the relative values of the fishmeal and fish oil produced. This economic allocation approach is also aligned with the agreed standards used in feed sustainability assessment proposed by the Global Feed Lifecycle Assessment (LCA) Institute (GFLI). The GFLI is an independent animal nutrition and food industry institute purposed with the development and management of tools and databases to stimulate continuous improvement of the environmental performance in the animal nutrition and food industry.

Economic allocation acts as a proxy for the nutritional value of the ingredients and places greater importance on the ingredients with a more limited availability and their relative demand. In the case of eFIFO we observe that with the changing balance in values between fishmeal and fish oil over time, we are better able to represent that sustainability burden. The ratio also allows us to recognise the economic contribution of by-products relative to the economic contribution of the direct human consumption component.

Notably, when using the eFIFO we observe that, on average, 1kg marine raw material gives 5kg farmed fish across global production systems. Thus, fish which do not have a food market are converted into 5 times the volume of fish that people do want to eat. Additionally, there is also now a decreasing impact on ecosystems, with over a 1/3 of marine ingredients now being made from by-products that are left over after fish produced for food have been processed. 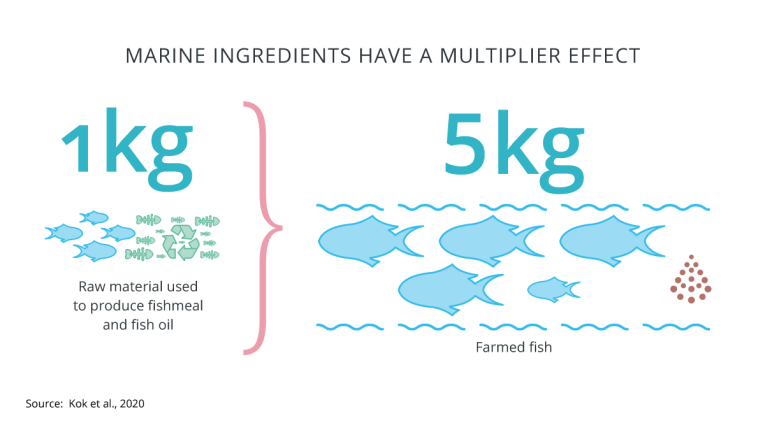 Lifecycle assessment (LCA) analyses has been developed to address the limitations of the previous metrics and to create more holistic sustainability metrics with traceability across the value chain and greater cross sector harmonisation of metrics. It is a far more complex calculation, and analyses take into account a variety of environmental impact categories, such as global warming potential, cumulative energy use, abiotic resource use, ozone depletion potential, consumptive water use; and land use, among others. To assess these impacts, the analyses do not just cover the production units, but cover the feed ingredients and their processing, through to the on farm production, to processing, distribution, consumption and waste disposal. All these steps use land, water, raw materials and energy, and invariably have impacts that can lead to harmful emissions. The overall aim is to provide a comprehensive assessment of the full (global) impact of food-production and avoid trade-offs or cross-subsidisations of sectors through incomplete sustainability accounting.

The gathering and analyses of data for the marine ingredients industry is still on going, but initial results have shown that the environmental foot-print for fishmeal and fish oil is mostly influenced by fuel use during fishing operations. High volume catch per unit effort (CPUE) and a predominance of purse-seine fishing results in most forage (small pelagic) fisheries having very low fuel use per tonne capture (see graphics below). 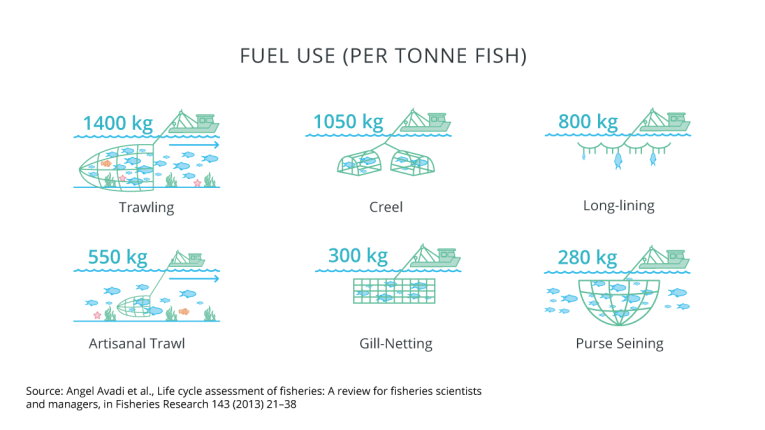 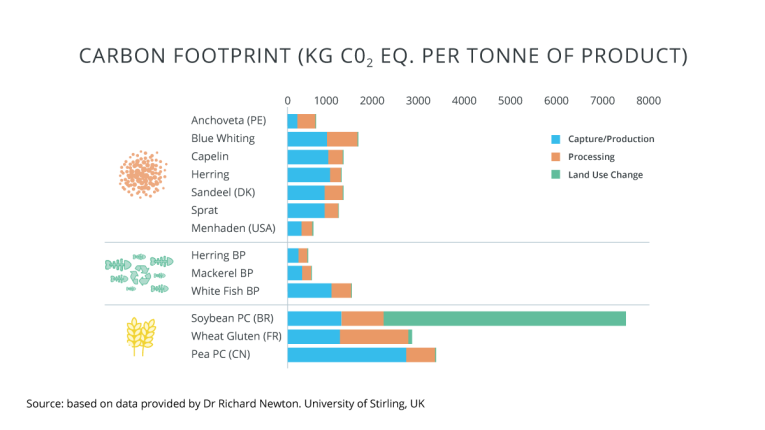 Finally, the growing production of by-product fish oil and fishmeal is improving the environmental footprint even further based on GFLI and PEFCR-Feed economic allocation rules.