The global growth of by-products

This piece was originally published in FishFirst (China), in Chinese (July 2021 edition). The Chinese pdf extract can be downloaded from the right hand side section.

By-products are offering valuable and much needed marine ingredients around the world and their availability and use is growing. Sourced from fish destined to direct human consumption, by-products or trimmings can represent between 30% and 70% of the wet weight of the fish depending on the species and are considered valuable raw material from which fishmeal and fish oil may be produced.

By-products can come from wild caught fish or aquaculture processing. Most of the raw material comes from finfish such as white fish trimmings (pollock, cod, hake, haddock and others), pelagic such as herring and mackerel, as well as other species such as salmon (wild and from aquaculture), tuna, pangasius and tilapia.

Reduction and production of these valuable marine ingredients is increasing thanks to fishing vessels being equipped to preserve or process by-products on board, or alternatively, onshore facilities have developed rapid collection methods to ensure that processors have a reliable outlet for their by-products. More and more larger aquaculture operators nowadays tend also to have access to advanced facilities that preserve and process by-product raw material into fishmeal and oil. This is particularly the case for farmed Atlantic salmon, pangasius and tilapia.

The very fact that the fish processing by-product is increasingly used as raw material to produce feed marine ingredients is a great news. They offer an opportunity for growth in a vital raw material to our global food security. Indeed, the utilisation of by-products helps reduce waste, and at the same time contributes to the production of high value products that promote health of humans and animals.

IFFO has calculated that currently around 31% of the world’s marine ingredients production comes from by-product (Figure 1). When we look separately at fishmeal and fish oil, we find that the global production of fishmeal from by-products accounts for 27%, while fish oil output from by-products represents 48% of the total fish oil production. The higher value compared to fishmeal is due mainly to the high oil yields of salmon and pangasius trimmings. [2] 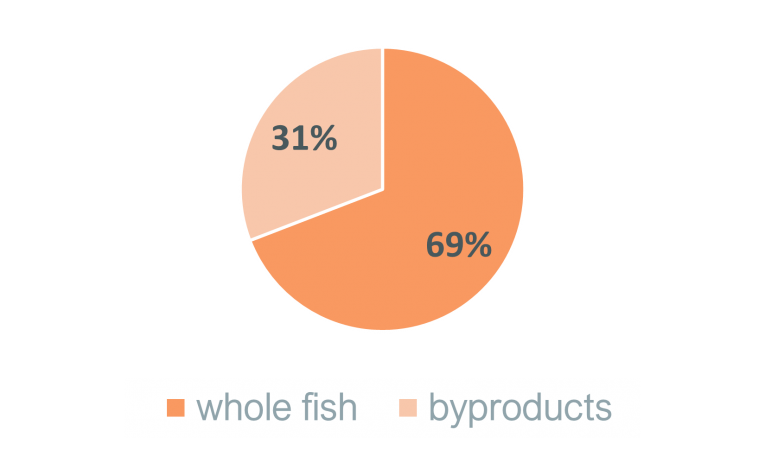 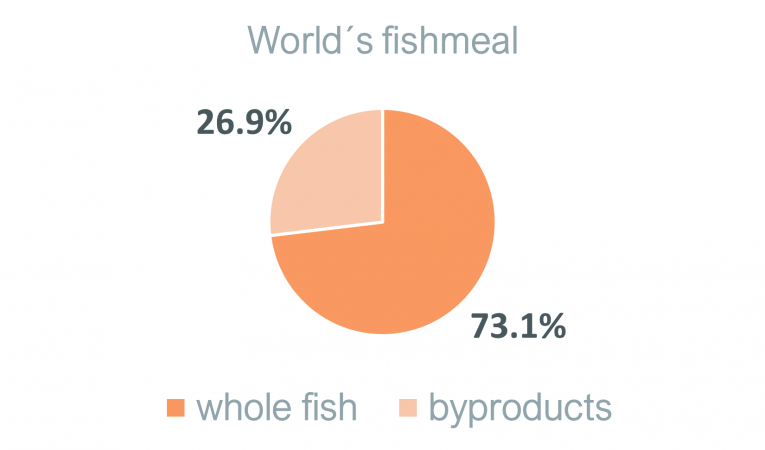 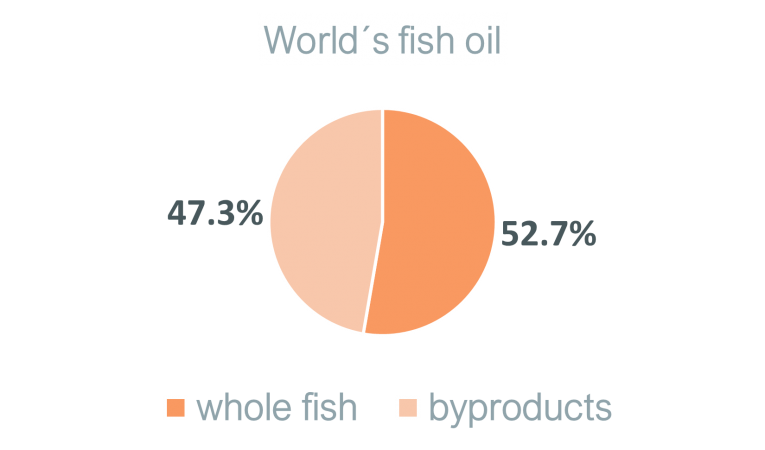 The species with the most potential

By-products coming from the filleting processing of pelagic species such as mackerel and herrings and from demersal fish such as hake and pollock provide more than 13% of the global raw material used for reduction to meal. Another 5% comes from tuna trimmings and offal, followed by 3.5% of salmon by-products, while 3% of pangasius off-cuts. Finally, tilapia, with 1,9%, is the farmed species that currently provides the least raw material for meal (Figure 4). 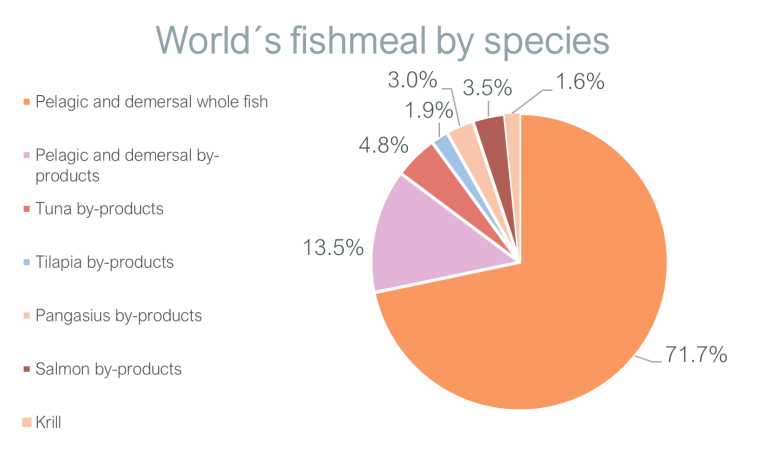 Moving to fish oil, salmon and pangasius by-products provide around 13% each, meaning that the combined contribution of these 2 species accounts for more than a quarter of the world´s total. The main reason is the high oil yields they produce. Another 2.7% of the global supply of fish oil is provided by tuna by-products, and finally 1.2% comes from tilapia off-cuts (figure 5). 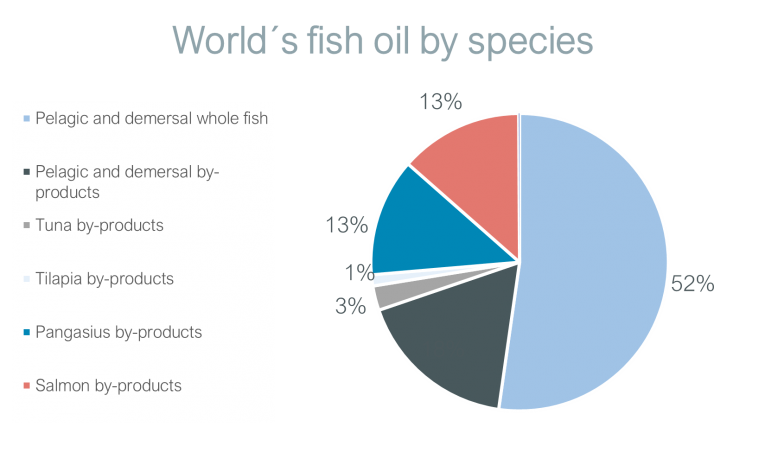 Where the most by-products are produced

Currently, Asia is by far the region where the recycling of precious fish raw material occurs more, and from where almost 40% of marine ingredients based on by-products is coming nowadays. Europe and Latin America follow suit, although all regions appear committed to reduce waste to some extent. Europe produces 23.3% of by-products for marine ingredients, with Latin America producing 20.8% and North America producing just 7.8% of global by-products (Figure 6). 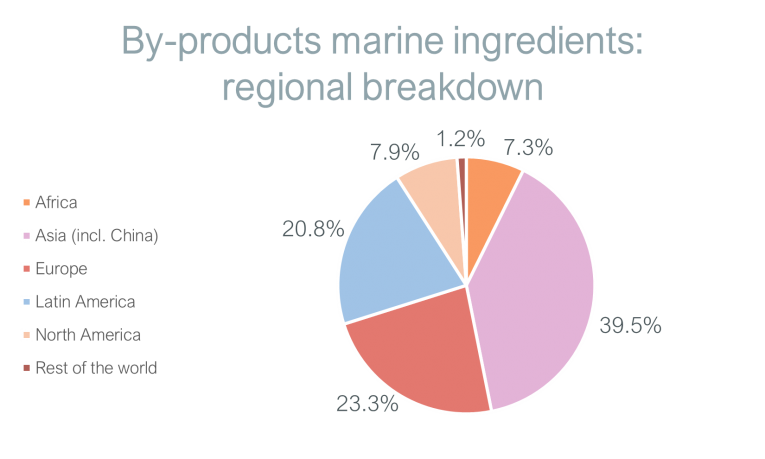 The role of China

As it usually happens, reporting China under the Asian umbrella does not allow to appreciate its individual contribution. Looking closer at the Asian giant is, however, not an easy task, as data of economic activities are always difficult to verify in such a vast country.

What the UN FAO revealed in the latest SOFIA report is jaw-dropping: China in 2018 was alone responsible for 35% of the global fish production. More precisely, China reported 15% of the global wild fish catches and 47% of the aquaculture output, for a total of more than 60 million metric tonnes of live weight fish.

If that was not enough, before the covid-19 pandemic disrupted the international trade in 2020, China was importing around 6.2 million metric tonnes of aquatic products per year according to the China Aquatic Products Processing & Marketing Alliance (CAPPMA). And it is well known that part of those imports tends to supply the vast Chinese reprocessing sector, specialised in importing frozen fish that is then processed and re-exported for direct human consumption in various markets worldwide. 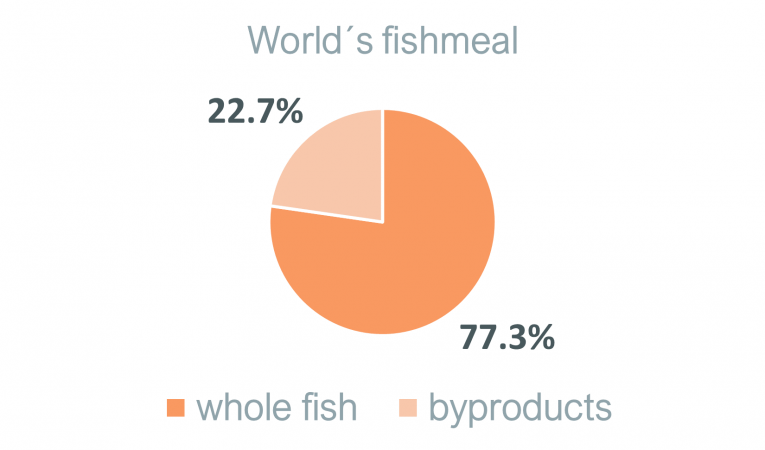 In terms of the breakdown of species used for reduction in China, the vast majority is represented by pelagic species at 74% (either whole fish or by-products), followed by tilapia by-products at 14%, plus some tuna by-products and some krill in the case of fishmeal. We estimate that, overall, around 500,000 metric tonnes of fish by-products are used every year in China to produce marine ingredients (Figure 7 and 8). 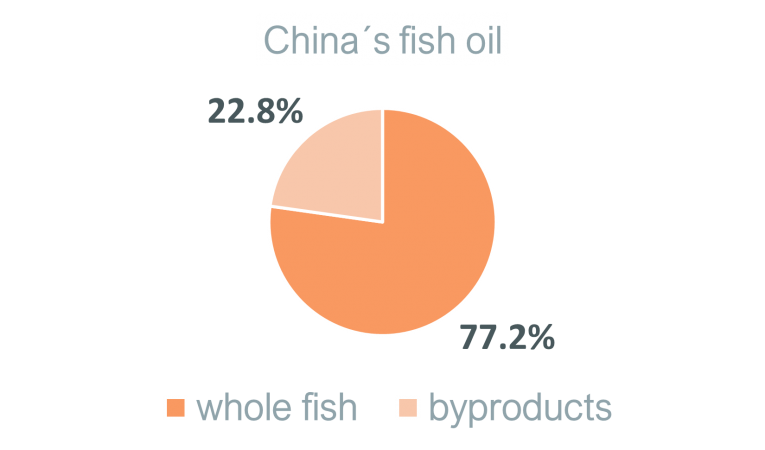 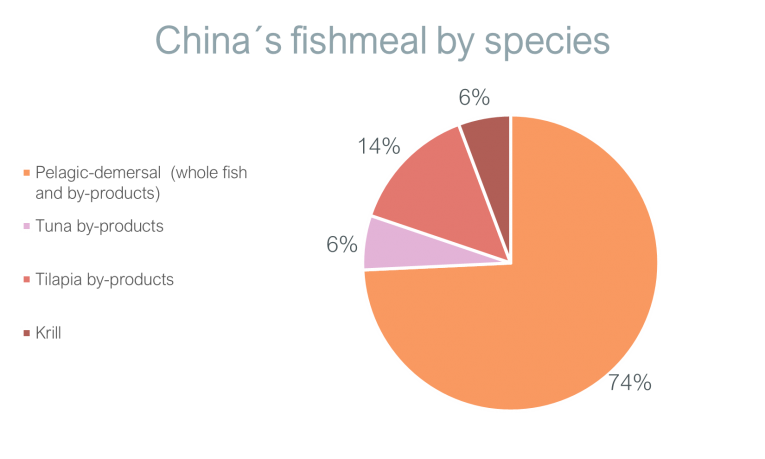 Huge potential remains for the increasing utilisation of by-products

Although these numbers tell us a promising story, there is still a large proportion of the by-product of fish for human consumption that are wasted instead of being turned into high value products that contribute to the supply of nutrient rich food.

Jackson and Newton have estimated that globally there is already a potential of almost 12 million tonnes of by-product produced in processing plants that are not collected for the production of marine ingredients. Asia is by far the area with the largest potential for the recycle of unused by-products, with an estimated tonnage of 5.6 million tonnes, 1 of which potentially recoverable in China.

[1] The State of World Fisheries And Aquaculture, (2020),Food and Agriculture Organization of the United States, available on http://www.fao.org/3/ca9229en/ca9229en.pdf

[3] IFFO does not includes shrimp meal in its estimate due to the lack of reliable sources.

[4] Estimates of annual fishmeal and fish oil productions in China are produced by IFFO.